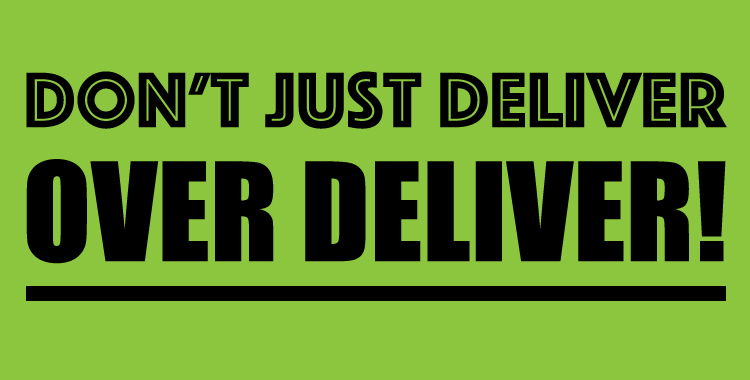 Always Over-Deliver What You Market To The World

Everyone was waiting for years for Floyd Mayweather and Manny Pacquiao to fight each other.

They felt that it would help the sport of boxing to have a sort of a renaissance from its glory days.

Mayweather was considered one of the most decorated boxers of his generation with an undefeated record.

Pacquiao was also hailed as one of the toughest boxers out there because of his brute force.

Pacquiao does not have an undefeated record, but he is revered among the boxing world and the people of his native Philippines.

Did I mentioned that he serves as a Congressman in the Philippine government?

Though Mayweather will likely be a Hall of Famer when his boxing career is over, many believed that he would not be considered among the greats like Rocky Marciano, Sugar Ray Leonard, Muhammed Ali, and Joe Frazier if he did not fight Pacquiao.

So the tension was building for years on whether or not Mayweather would fight Pacquiao.

Then the news finally came that both gentleman had signed the contract to fight each on May 2nd of 2015 in Las Vegas.

The media was promoting the fight through talk shows like First Take.

Many were thinking that it was going to be the biggest fight of this century.

They believed it was going to be like the Frazier-Ali fight and Leonard-Tommy Hearns fight.

They had good reason to believe that they would witness history.

Tickets sold out at the arena.

Odd makers were placing point spreads in casinos on the fight.

And for those who couldn’t make it live, they had the opportunity to watch the fight on pay-per-view for about 100 dollars, which is considered a record high for a boxing match.

In addition, both fighters would become the first billion dollar pay-per-view stars in the history of boxing.

It was an intense debate between Stephen A. Smith and Skip Bayless on the First Take show on who would win the fight.

There were celebrities, former boxers, etc. who would place their picks on the board.

On the day of the fight, Twitter was exploding about the fight.

At the same time, there was a Game 7 between the San Antonio Spurs and the Los Angeles Clippers.

When the Clippers pulled off the huge series win by the score of 111-109, everyone was thrilled because they saw an intense matchup and was hoping that the Mayweather-Pacquiao fight would be as epic as the basketball matchup.

When it was all said and done, Mayweather defeated Pacquiao by unanimous decision to remain undefeated.

Unfortunately, the fight did not live up to the hype.

The fight did go all 12 rounds.

However, it was not entertaining to the casual boxing fan because Mayweather found a way to avoid the hits that Pacquiao was throwing.

Many believed that Mayweather was not into the fight.

Many also observed that Pacquiao was not himself.

Then the report would be released almost a day later that Pacquiao had injured his shoulder during training in April.

At the end of it all, people believed that they wasted their money on a fight that did not live up to the hype.

Reporters and analyst believed that the fight was probably the death nail for the sport of boxing.

Longtime sports broadcaster Jim Lampley said to Rich Eisen that he feels “terrible” for the people whose time was wasted after spending close to $100 dollars in watching the fight according to the USA Today report by Nick Schwartz.

What can businesses learn from the Mayweather-Pacquaio fight?

These lessons below will explain it all:

1. They have to go the extra mile to deliver what they had marketed to the customers.

2. They have to be very honest and transparent with people who are looking to them for leadership.

3. They must not go for the splash when they are marketing their services or products because if they do not deliver, it will leave a bad reputation for the company.

4. You must keep your word.

5. Do not cut corners in your business because people will eventually find out.

In this age of social media, everyone is under the microscope of scrutinity.

It is a good thing because it will put everyone in check to be ethical with the way they do business.

If you want to be successful, you must always deliver value to your clients/customers because it will allow you to stand out from your competition.