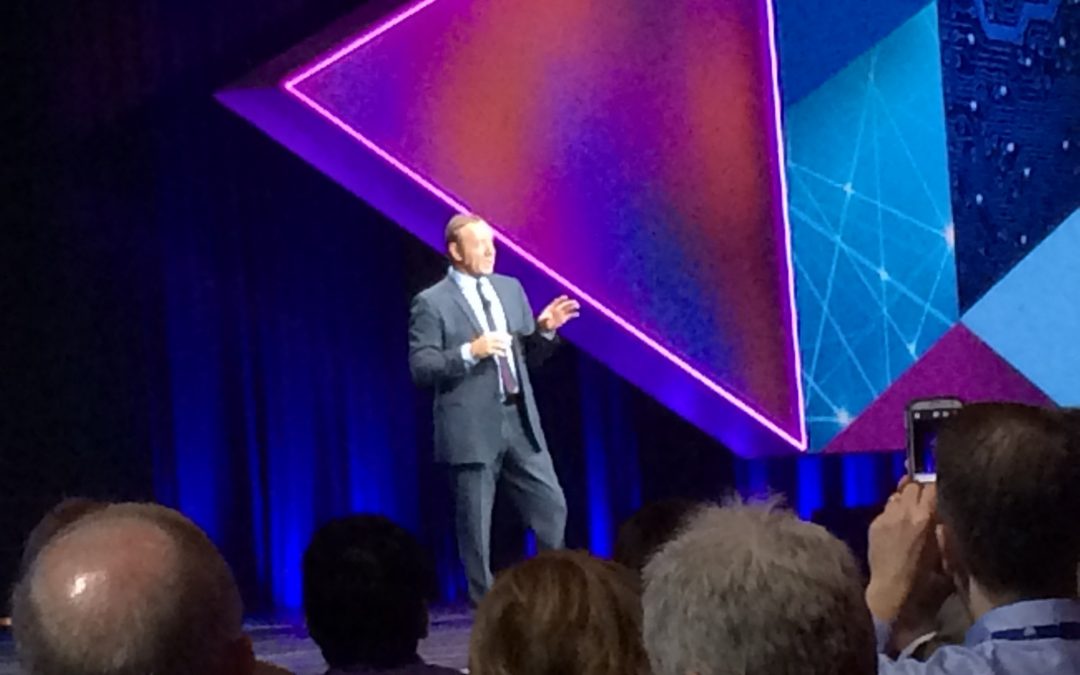 Kevin Spacey: Storytelling In The Age Of Disruption

It’s hard to know what to expect when a renowned actor makes an appearance as a keynote speaker at a technology conference. When Kevin Spacey was about to make his entrance onto the stage at this year’s IBM Impact in Las Vegas I found myself wondering the same thing.

After 3 days of hearing about clouds, composable business and big data, you can only wonder what meaningful business ideas may come from someone who has probably never set foot in a data center, built a mobile application or architected the enterprise of the future.

Of course I was fascinated and excited. I mean Kevin Spacey has graced the screen of some of my favorite movies. From the legendary Glengarry Glen Ross to his riveting and bizarre character portrayals in Seven and American Beauty.

But again, what was he going to tell me that was relevant to business or technology? Perhaps what I seek most when I listen to a keynote is that nugget of knowledge that I can build off of. After all, only so much can be taught in 30 minutes.

“How drunk are you people?’ Spacey asked as he took the stage. A conference, Vegas, final day of the show, I’d say his humor wasn’t lost on the crowd. In fact, it drew a big laugh. Then he asked the question…

“You probably wonder what the heck I’m going to tell you about these devices and all of this technology?” He went on to explain, “I mean we all have something in common, many of you hold PHD’s from schools like MIT, and I (pause), can say MIT. It was at this moment he had already won the crowd of more than 7,000 people. They were hanging onto every word wondering what he might say next.

What he wound up saying next was alarming, abrasive and perhaps the most charming use of the word f#ck that I had ever seen on stag. In front of an audience full of buttoned up corporate executives, he said,

“I don’t know a f#cking thing about any of this!”

We all looked around each other tentatively. It was a quick, passing glance but we sought to find out whether our fellow attendees found it offensive, amusing or somewhere in between.

He used wit, charm and humor to weave together stories about his career, the transformation of television, the problems with studio executives and the most provoking subject matter of his keynote: the radical disruption that’s happening in every industry.

Follow Those That Know What People Will Want Next

When Kevin Spacey pitched his idea of “House of Cards” to various networks they all were interested in his show; politics, sex, corruption – a timeless formula for successful media. But there was a problem. Every network he pitched wanted a pilot.

For Spacey, as he so eloquently explained, “We had an idea for a show that developed over a period of time, and a pilot wasn’t in the cards.”

Instead of pushing on the networks or changing his vision for the show, he did something else. He knew he needed to find someone who was willing to take a risk, so he pivoted and brought the idea to the executives at Netflix. Spacey was solving a business problem; he was disrupting and perhaps forever driving to change the way content is delivered. Furthermore, he was looking at what the industry is going to become and he was responding and leading change. In many ways he was an innovator. It was as if he saw just a little glimpse of the future.

We Exist Therefore We Disrupt

Netflix looked at the concept and vision of the show and the team Spacey had built (I’m sure his experience helped) and decided to give him a commitment for 2+ seasons at the time of inception.

This was a complete pivot from the norm, in the world of television this would never happen. There was no proof that it would work. But as Spacey said, no amount of data can predict the future. It can give you a good guess at probability, but there are just too many factors – particularly in entertainment. “Sometimes you just have to throw things at the wall and see what f*cking sticks.”

Of course, House of Cards is now a wildly successful show and this is just one example of disruption that he gave, but the story took hold.

It was story after story that he told. Little stories weaved within big stories. Such a good storyteller is he, it would have been easy to forget why we were there in that room. We were there to learn, create and grow our businesses; primarily as technology companies. It would only be fair to ask what did we learn from Kevin Spacey? If we merely wanted to be entertained, we could have watched a movie.

Spacey’s stories made disruption make sense to everyone. It made the endless techno-garble of cloud, mobility, analytics make sense as well because he reminded the masses that in the end those words, buzzwords if I may, aren’t the reason people connect to brands. People connect to the story, and the way the story is told is the way a brand is perceived.

In a world full of bits, bytes and jargon, the story may be the most disruptive element of all, and those that tell their story the best may just be surprised at how F#cking well things work out for them going forward.

This post was written as part of the IBM for Midsize Business program, which provides midsize businesses with the tools, expertise and solutions they need to become engines of a smarter planet. I’ve been compensated to contribute to this program, but the opinions expressed in this post are my own and don’t necessarily represent IBM’s positions, strategies or opinions.