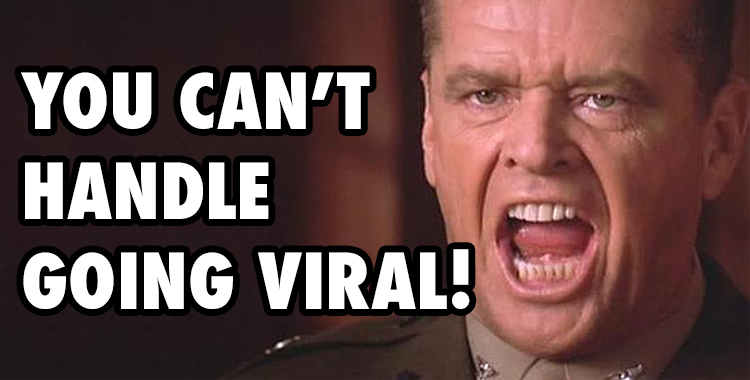 It’s every marketer’s (boss’s) dream to “go viral” and reach thousands if not millions of new people. While many blogs, tweets, infographics and videos are created with this specific goal in mind, I believe very little thought actually goes into what happens in the rare case that the content does in fact reach viral status.

Will your website be able to handle the increase in traffic?

Are your marketing funnels even set up to capitalize on each new impression?

What content can your newly acquired audience expect next and more importantly, when is it coming out?

But before we get to the good stuff, let’s first start with a story.

A Story of Going Viral

So my friend’s YouTube video went viral the other day — as in 3 weeks ago.

By viral I mean 252,000+ views to date, with a laundry list of local news interviews and main stream media coverage from major outlets like Time.

I had no idea this viral victory was even taking place until I saw his Facebook status update in my News Feed.

That definitely caught my attention and as a marketer my curiosity.

You see Yancy and his buddy, Eric, own a company called Hopstories, that specializes in video storytelling of business and individuals in the craft beer industry.

The soon-to-be viral video they created was a nearly immediate rebuttal to Budweiser’s Super Bowl commercial, “Brewed The Hard Way”. The spoof defended the craft beer industry that the macro-beer producer seemed to be taking a jab at.

Here’s the Budweiser Commercial if you missed it:

Now there’s numerous reasons why Hopstories’ video went viral including timing and turnaround (they had tons of stock footage on hand to use from their previous shoots), quality video production, and the most important factor – shareability. Their emotionally driven parody video became a cause that unified and empowered the craft beer community against the beer giant bully.

The funny thing was, while most of Yancy’s friends were commenting on his Facebook update with “congrats”, “great job”, and “nice work”, as a marketer I couldn’t help but watch the video and immediately start thinking of ways that they could capitalize on the sudden national exposure.

That’s when I picked up the phone and called Yancy with a few tips that I thought I’d share with you today.

Besides, that’s what friends are for right?

When it comes to video content, optimization will highly depend on the platform it’s being hosted on, in this case YouTube.

And don’t overlook small opportunities like creating a custom YouTube video thumbnail. After all, if your video is being embedded on major media sites you’ll want the pre-play thumbnail to be just as captivating as the video itself.

Remember, while there will always be active social media users who convert and share your content without question, the point is to optimize your content enough to make it as easy as possible for the majority of other users to take action.

For YouTube videos this can be done by using annotations to convert new subscribers or link out to your associated website.

In most cases your viral content will be the first impression viewers will have with your brand.  Provide them with a direction and a reason to stick around.

Duplicate content is never a good thing. But if your content can work across multiple platforms, there’s no reason not to repurpose it. If your YouTube video is generating a viral response, it’s a good indicator that the video would get the same response if uploaded elsewhere.

For example uploading the video as a Facebook video will help generate even more awareness and due to the recent popularity and News Feed distribution of  native Facebook videos you may even end up getting more visibility than your original YouTube video.

Finally, to help fuel the fire think about how that one video can turn into five Facebook posts, ten tweets, three blogs and one 15 second teaser on Instagram.

As Brian Fanzo (iSocialFanz) would say, “upcycle” your best content.

If you’re going viral and earning press mentions online, you’re going to receive inbound traffic to your website and other properties. That’s a given.

What’s not a given is that your site is properly set up to funnel new visitor traffic. The problem then becomes how do you convert all these valuable new impressions before they stop flowing in organically.

Converting web traffic depends on what your marketing goals are. If it’s lead generation, develop downloadable collateral that a new visitor can receive in exchange for their email. Another idea would be to have a non-invasive lead capture appear before the user leaves your site.

Heck, if you have dollars to spend try advertising your content across the web or set up re-marketing on your site to capture all those new visitors.

One way to keep the viral fire going is to continue the conversation by actively monitoring the web and social media networks for mentions of your video or brand name. This is one of the more difficult tasks to accomplish especially if you don’t have a full-time Community Manager who knows how to find these conversations and build the relationships out of the connections your viral content creates.

At bare minimum, set up Google Alerts to notify you when your company name is mentioned across the web in real-time.

After all is said and done you now have 500+ new YouTube subscribers, 200+ new email subscribers, 300+ new Facebook fans, the list goes on. Now for the most important question you need to ask yourself before you try to go viral.

Think about it. How many times have you seen a one-hit wonder come and go because there was no content strategy in place to follow-up after going viral?

Think about that kind of pressure if you’re not prepared!? While I can’t answer this question for you, I do highly encourage you to keep this in mind.

And that doesn’t mean you need to follow-up your video with another video. Maybe it’s a broader campaign that’s relevant to your original content but not the same format.

For this example, as Hopstories has already built a camaraderie of craft brewers who have come together for a common cause, they could then make an entirely new user-generated campaign their community could participate in.

Like using #HowiBrew or #MyCraftBeer where users could share pictures of them enjoying their favorite craft beer or a photo of the home brewer with his latest batch.

And that’s where ‘upcycling’ content comes into play once again. Hopstories could then create an entire blog series, Facebook album, etc. featuring submissions to keep the momentum going after their original video buzz fades. Maybe even host a weekly Twitter chat called #CraftBeerChat. Why not!?

Disclaimer: You can go mad trying to strategize entire marketing campaigns based entirely on wether or not a single piece of content goes viral. So I’m not recommending it unless you’ve got some crazy Nostradamus-like predictive powers.

The trick here is to be dynamic enough to develop a connection with your viewers that survives long after your 5-minutes of fame are over.

My one piece of advice is however you decide to answer “what’s next?” just make sure that you as a brand fully adopt, support and promote it 100%. After all, new fans won’t adopt a campaign that’s not even being enforced by the brand trying to establish it.

Let me know in the comments below.