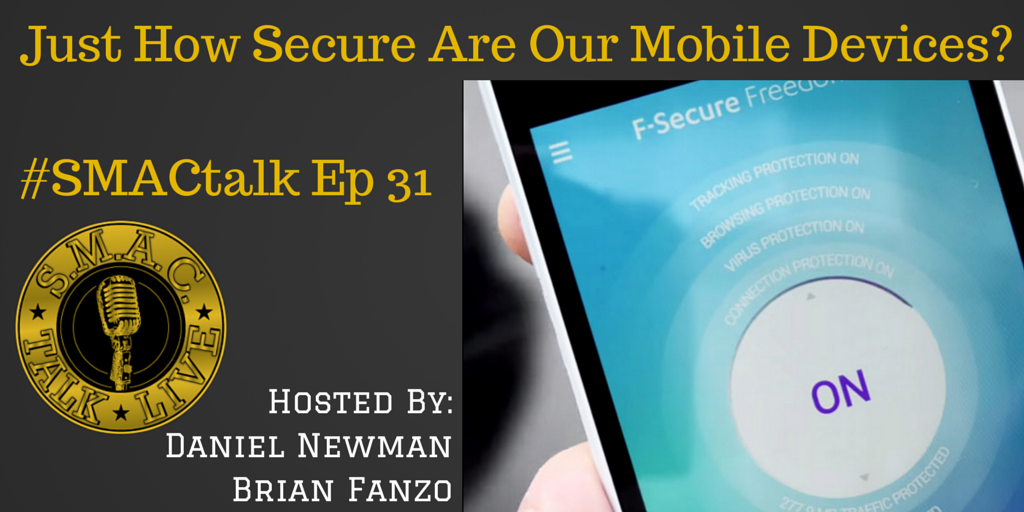 #SMACTalk Episode #31 – Just How Secure Are Our Mobile Devices?

For this episode, Brian and I partnered up with F-Secure, inventors of software that enables users to keep themselves private while connected to the web via mobile. They reached out via Twitter so I researched the product and the topic, finding it intriguing enough to discuss further.

Are people really aware of how secure they are (or are not) on mobile devices?

Brian says there are two types of users:

Per Brian, mobile holds just about every piece of important information we want to have access to these days.

I did a trial with F-Secure and within the first three days there were 867 tracking attempts blocked by the solution. There were also multiple harmful sites blocked, as well as approximately two gigabytes of traffic from which the tool shielded my devices.

We know that often our activities are tracked for marketing purposes – but what about the times when we aren’t aware that we’re being tracked?

I think people just need to understand that everything starts with information. People are very trusting with the internet. In particular, we trust our internet connections to be relatively secure and my trial of F-Secure revealed that to be a mistaken assumption.

Brian points out that people seem to understand public internet access exposes them to hacking, but that in many cases, they don’t understand exactly what is vulnerable. He mentions the fact that people think of their laptops as being open to exploitations but not so much their cell phones, which is incorrect.

“It’s always best to know, and then you can make the right decision,” says Brian. He suggests starting with the highest security settings on devices (“everything off”) and then turning things on individually as warranted, rather than the other way around. Only enable access for apps and software that truly need it. In other words, weigh the risk versus reward.

Everything people do when they surf the internet is trackable. But it is possible to mask your IP address. There are tools that can help you manage that.

How do you weigh the experience of the internet versus the importance of being private?

Brian points out that many people have high privacy settings on their mobile devices for shopping sites like Amazon, but that when they visit the same sites from their computers they don’t take the same security measures. He suggests that by allowing access to some but not all of one’s data, there’s full risk with no or only partial reward.

I wanted to know what Brian thought about the security of public Wi-Fi? Is the risk worth the reward? Because public Wi-Fi is relatively unsecure, tools like F-Secure can have a big impact on that decision.

While Brian emphasizes the importance of taking security measures, I mention that some people shy away from tools and software that slow them down in the process. There are far fewer lightweight security options for mobile devices than for computers.

“Just because it’s your mobile device… doesn’t mean you know where all of your data is going,” Brian says. He notes that information like contacts and your location history may be accessible to others.

We’re in a world where data will set you free and it will also incriminate the heck out of you.

Everything we do can be captured. Choosing well in deciding what we opt in for is critical and it can be a daunting process. F-Secure removes some of the labor and guesswork from mobile security by having a one-click on/off setting. If you’re in a public place and don’t want to be tracked, you can quickly turn F-Secure on and be safe. On the other hand, if you’re in your own home where you’re comfortable the risk is low, you can quickly turn it off.

Brian recommends denying mobile apps’ access to things like your location, camera, microphone, etc. Then, if an app requires access based on something you’re trying to do, you can go in and enable it. Look at the security settings case by case and only enable what’s necessary.

In this day and age, our mobile devices are more important to us than things like car keys. We simply can’t function without them.

An airline recently required a birth certificate for one of Brian’s daughters while his wife was traveling with the children. Neither the birth certificate nor Brian was on hand. The only way to provide this document under the circumstances was for him to take a photo of it with his mobile device and send it to his wife at the airport. This met the need—but imagine how that might have turned out without the capabilities of mobile?

Would you like to learn more or discuss this topic or this product? Brian and I would love to hear from you! Chat with us on Twitter or use the hashtag #SMACTalk to see the latest in Social, Mobile, Analytics, and Cloud.

Also, if you’re interested in experiencing mobile freedom, follow this link and use offer code qhh42f for a free, three month trial of F-Secure Freedom!

Our compliments to F-Secure not only on their product but on their influencer marketing outreach. Their team did a great job in identifying interested parties who’d like to learn more and talk about their brand.