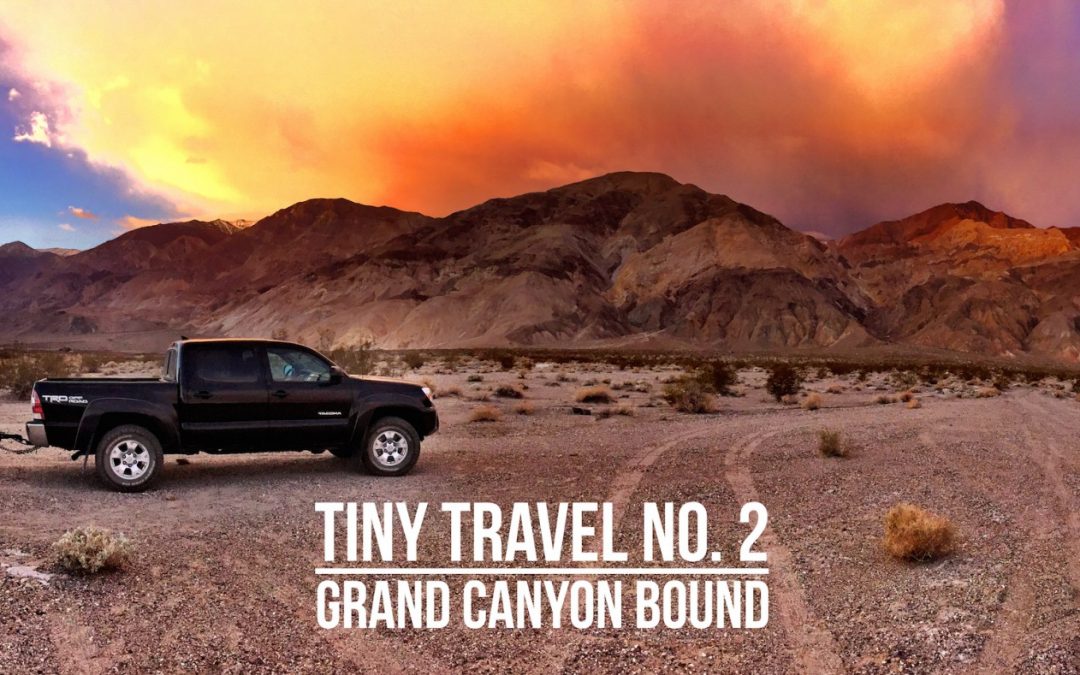 GoPro mounted, connected to iPad, and ready to film?

Trailer closed up, dogs went to the bathroom, ready to roll?

… Wait, is everything charged?

Katie and I were ready to embark on our cross country journey! We said our goodbyes to California, put Tater in drive, and headed to Highway 395 to put the Sierra Nevada mountains in our rear-view mirror.

We got off to a really strong start. Made it about a quarter-mile, looked down at the iPad, and noticed the GoPro was sitting still filming the middle of the street. Is it frozen?

Oh wait… it fell off!

After my first trailer-in-haul emergency u-turn, we spotted the little guy laying in the middle of the opposite lane.  I threw on the hazards and ran over to the fallen GoPro expecting the worst. But we were in luck! It was still recording and only had a small piece of plastic missing off the mount. I’m sure everyone on Meerkat got a kick out of this. (Later that night, we reviewed the footage and the GoPro was run over 3 times – but barely had a scratch!)

We turned back around and headed on our way. If the rest of the trip was going to be anything like the first 15 minutes… we knew it would be interesting!

We pushed on to Nevada and found a place to camp outside of Las Vegas, stopping in search of propane on the way. Tot, the tiny expedition trailer, was running low and our main way to cook and stay warm. I wasn’t sure how much we had left, but I knew it wouldn’t last us more than 2 nights.

If you have never driven Interstate 15 between Barstow, CA and Las Vegas, NV, let me just say you won’t see much besides desert and a million signs for Peggy Sue’s Fifties Diner. Like a lot of places in the desert, Peggy Sue’s is very unique and interesting in its own little way. You can grab a burger and check out some really big dinosaur statues! You know, if you’re in to that kind of thing.

We ended up making it to Primm, NV and decided to set up camp next to Ivanpah Dry Lake. After watching an amazing sunset, it was time for dinner, a little live streaming, and then bed. We needed to cover about 280 miles in the morning – and of course, find some propane.

The first night into our cross country adventure and I slept like crap!

I was in a hurry to find a place to set up camp before the sun went down and picked a poor spot right next to some train tracks. I shouldn’t have been surprised, but it seemed like every 30 minutes another 100+ car train would come flying by, scaring the crap out of me each time. Of course, Katie wasn’t phased by this. Apparently she didn’t even hear the trains.

We packed up camp, fed the boys, and got all of our gadgets situated.

Getting back into the truck, I received a notification. Periscope had just launched! I played around a little bit and then decided we would Periscope our trip back to pavement from the dry lake bed. After thinking we were lost and bumping our way through the desert to civilization, I had already decided I didn’t like Periscope. It just wouldn’t work for our trip. We needed to engage with our viewers and the chat function of Periscope didn’t allow this very easily. We would only use Meerkat the rest of the way home.

We hit the pavement and snaked our way through the Nevada desert to Laughlin. Laughlin is like a mini Las Vegas with the Colorado River flowing right next to the casinos. If you like to gamble, but also like to explore the outdoors, I would highly recommend checking out Laughlin next time you’re in Nevada.

After talking to a couple of locals we were able to find a place that had propane. We filled up and headed to Wal-Mart for more supplies. This was the first place since we started our trip that was big enough for supplies. We needed to figure out a better situation for charging all of our devices. I picked up some more food, water, and a DC-to-AC inverter with USB outlets to plug into Tater.

We were learning as we went, but it was fun. Who knew how many things you needed to keep charged to document a cross country trip and stay connected?!

After spending a long time in Laughlin re-supplying, eating, and letting the dogs stretch their legs, I insisted we get back on the road if we were going to make the Grand Canyon.

We entered Arizona and the further east we went, the higher we climbed. We were in the Kaibab National Forest now, just under 7000 ft. elevation. Katie and I love looking for wildlife when we travel and got excited by all the Elk signs we were seeing. As it turned out, we wouldn’t see an Elk for a couple more states.

We made it to Williams, AZ which is considered the “Gateway To The Grand Canyon.” Williams is a very cool, old western-style mountain town located right in the middle of Kaibab National Forest. If you ever make it to the South Rim, make sure to put Williams on your list of places to visit!

Katie and I were losing sunlight and were still about 30 miles from Grand Canyon National Park. We decided we would find a place in the forest to camp for the night. Being at 7000 ft. elevation, it was going to get chilly once the sun disappeared over the horizon.

When camping in a lot of places out west, you have to be very observant of the current fire restrictions. I looked for places with wood and tried to find out if there were any current fire bans. Everyone I spoke to wasn’t 100% sure though.

I decided not to risk having a fire, so we headed out of town and into the forest.

We found a great spot and still had some sunlight left! Katie got the dogs situated while I set up the kitchen. We grilled up some steaks and had a couple drinks with the Meerkat family. Once dinner was finished, we said our goodnights to everyone and Katie booked it for the trailer. The temps drop fast when you are in the high desert regions and Katie don’t mess around with the cold.

I’m excited for Katie to see the Grand Canyon first thing in the morning. I’m expecting a mind explosion to take place.