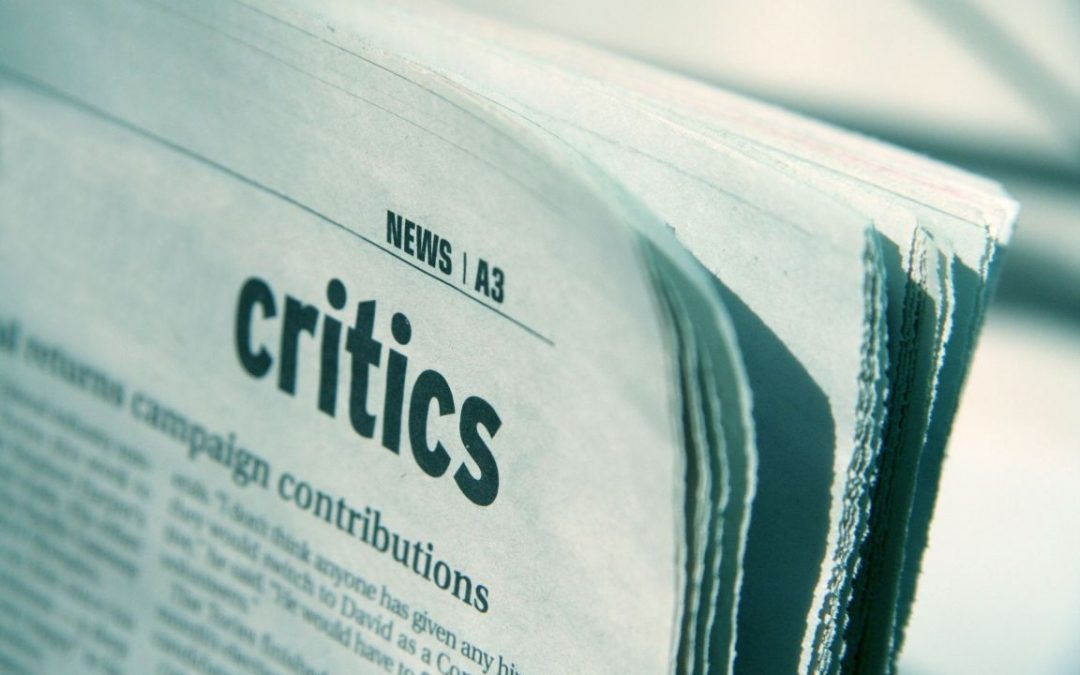 Improve Yourself By Embracing Your Dissenters

Don’t You Criticize Me!

It is inherent that we as human beings desire to be loved, supported, and appreciated.

While the support we seek certainly gives us a better sense of self. We must recognize that we are hardly flawless yet we often struggle to see our own imperfection.

One of the only ways for us to improve is to be aware of our shortcomings and then choose to embrace them. But where does this awareness come from?

Ideally we recognize our own faults and then we work on them. This is usually what drives us to fix them.

However, often the best way to become aware is to listen to the feedback of others. People are often not hesitant to criticize so if you listen attentively I assure you a whole dose of reality will come your way.

I’ve never met anyone who enjoys being criticized. It sort of goes against our nature, but nonetheless I just haven’t come across the person that takes the whole “Bring it on” approach to criticism.

I have seen some people who are pretty good on the surface at taking negative feedback (I’m one of them). However deep down we just don’t like it.

This is probably due to the fact that we as humans seek recognition. Especially by those closest to us, however in the highly social world we live in we seek the support of those closest to us as well as those we barely even know.

Case in point this past week I found out that someone I had done business with over seven years ago had a negative opinion about me; said I was cocky. I barely recall the interactions that I had with this person, but somehow seven years and several jobs later we crossed paths again and apparently I left an unfavorable impression. For whatever reason the news of disapproval really bothered me.

In reality, I probably have a few people out there that aren’t fond of me. I don’t think this is the exception, but rather the rule. What is important is that we recognize this and use it to keep us humble.

As a leader and a relatively outspoken one there is no way that I can please everyone. I made the choice not to pursue universal approval many years ago when I decided to go into management and more appropriately into leadership.

But I digress, the point here isn’t to dissect the ways I have managed not to please everyone, but rather to share how I take a relatively negative means of communication and steer it toward a positive result.

Further as I heard about this transgression that led to the negative opinion what seems like forever ago, I realize that some of the error in my way were truly based on small yet important character flaws.

Learning From Your Dissenters.

Thankfully I had others (many) to point it out to me. Friends, colleagues and customers. Some more subtle and others more direct, yet all with the intention of letting me know of their disapproval of my behavior.

As I have grown throughout my career I have become more cognizant of my weaknesses including over-confidence. With this heightened awareness I have been able to take action to mitigate it whereas it affects my ability to do my job well.

By no means have I been able to completely rid myself of hubris nor am I sure that I would want to, however it has become more of a focus on taking the good that comes with self confidence and eliminating the negative outcomes associated with arrogance.

Sometimes I have to remind myself that it takes a bit of hubris to make the tough calls. Those that many choose not to make or never have the opportunity to make. When you rise to leadership roles it is the decisions made when your back is against the walls that often define you. At those times you have to believe in yourself, so a healthy confidence in oneself has to co-exist with the humility that makes great leaders.

Strangely, as I have grown older and more self aware the criticism has never stopped coming.

I had a mentor that used to say “If you don’t upset someone every day you probably aren’t doing your job.” While I don’t know if that sage piece of advice was entirely true, what I did come away with from that quip is the following.The more you put yourself out there the more likely you will draw criticism.

I have no doubt that criticism does provide an opportunity for learning. But it is important that you see the difference between useful criticism as opposed to hateful banter.

While it is nice to always try to see the best in others (Believe me, I try) Some of the things that people hate most are the things that you may least suspect. For instance, people by nature are not always happy for you when you accomplish great things. The human condition often drives jealousy and disdain toward others that accomplish great things.

There is only one thing to be learned from those that choose this behavior and that is to choose another behavior.

However, sometimes the feedback is useful and when it is be sure to take the chance to learn from it even if you do have to admit weakness in the process.

While we all should try to accentuate our strengths, it never hurts to shore up a shortcoming or two in the pursuit of great results.

“As long as you challenge the status quo, you will be judged. The alternative is to be ignored.” ~Unknown